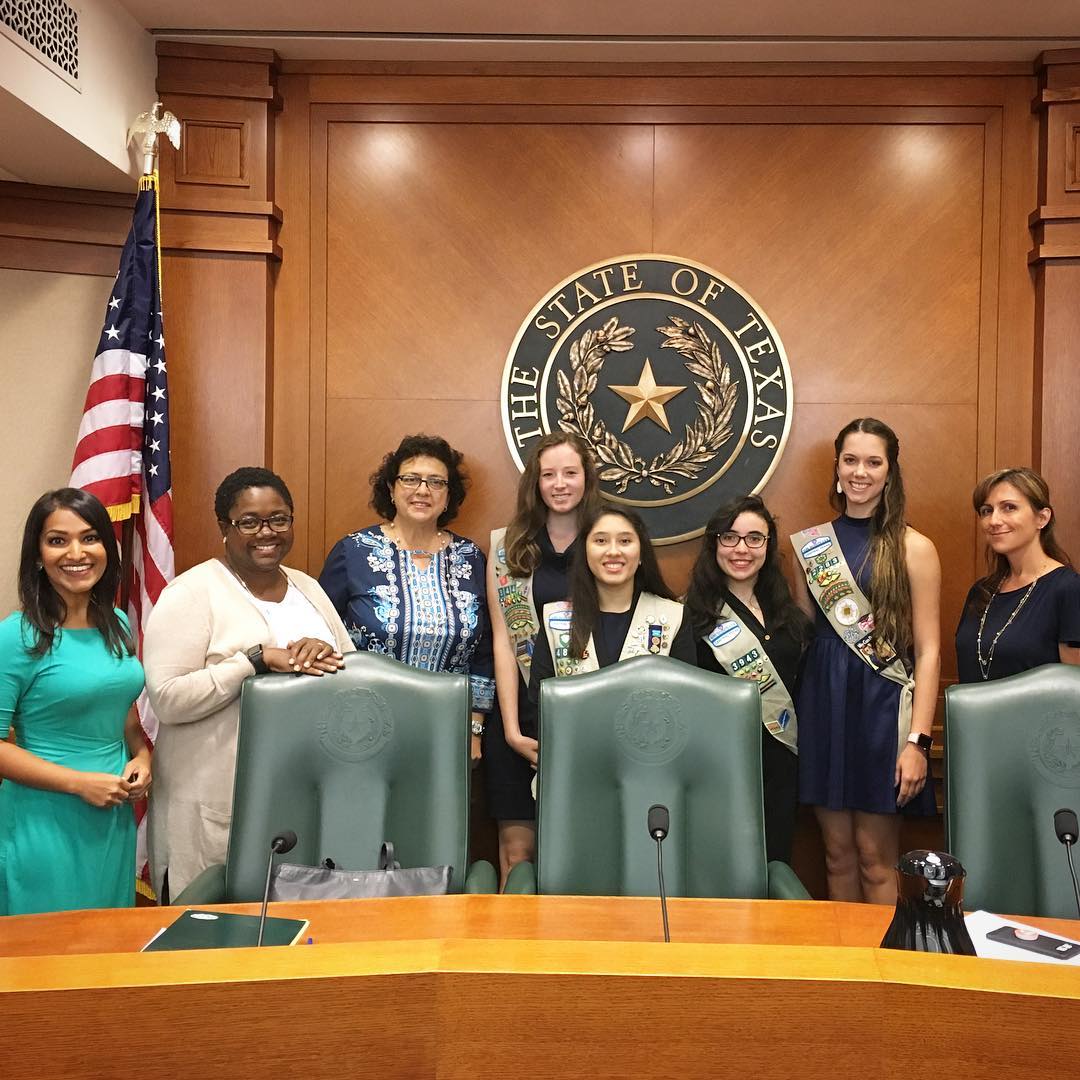 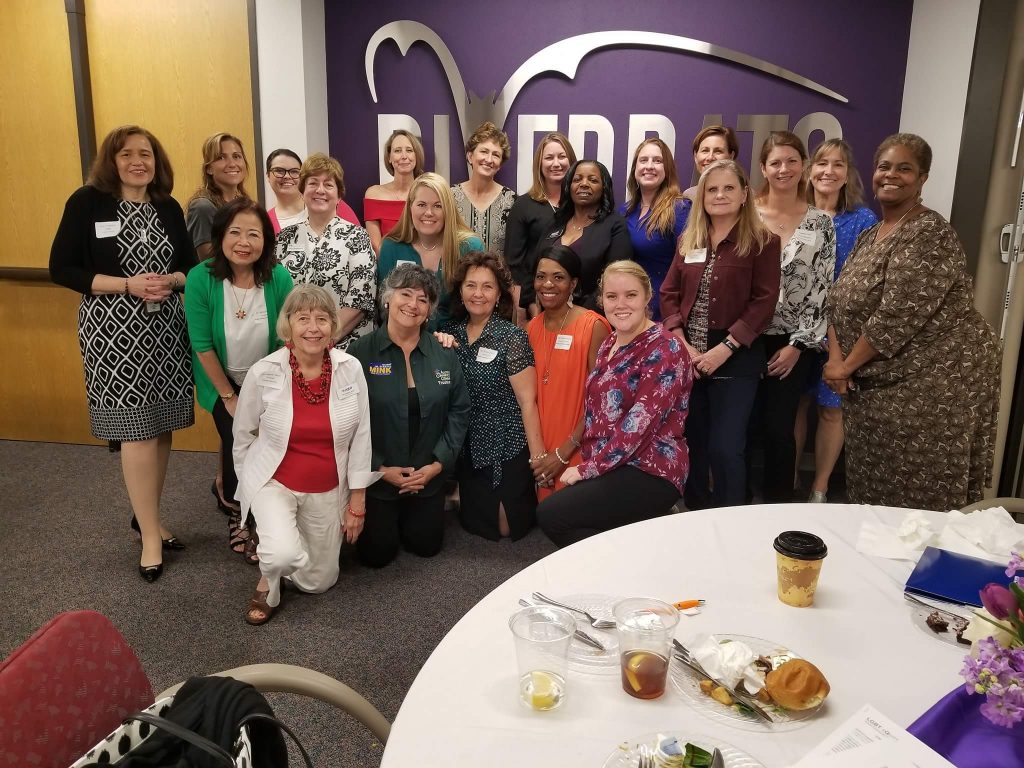 We can’t count the number of times gender has come up in news or conversations in the last few years.  The truth is, there’s a movement to put everyone on equal footing by making terms gender neutral: “wait staff”, “sales person”, and “council member” are all terms spurred on by this change in society.

Change isn’t always a bad thing, but in this specific case, I sort of hate it.

I’ve spent many years as a Girl Scout leader.  A few years back, my girls, then entering 4th and 6th grade, had worked hard and saved their money for an overnight trip to Johnson Space Center in Houston.  We were going to NASA.  Do you know how many boxes of cookies it takes to propel a dozen little girls to NASA?  At around 50 cents profit per box, it’s an Endeavor (see what I did there?).

We were so excited.  That phrase is terrible because it’s so maudlin and commonplace, it can’t capture the bounding, bubbling, exuberance these little girls had as they crammed into minivans and headed for space (or their version of it here in Texas).

We arrived in Houston, about an hour before check in was to begin, and even being relegated to playing in the humid July air couldn’t bring these girls down.  We finally got to enter the building and begin the program.

The program started in the Space Center’s theater, where a slideshow of former scouts-turned-astronauts played as the girls settled in.  There were a handful of women shown.  There were countless men.  But hey, women in space is a little newer than men in space, right?  No big deal.

After a presentation in the theater, the girls were sent on a tour to various stations around the building.  Our group started with a presentation about electricity.  It was mostly the teenaged tour guide telling these 9 and 11-year-olds about electricity and how it travels.  The crowning moment of the presentation is typically when two girls get to touch opposite ends of a stick that produces light to show the currents inside.  If you’re finding it hard to imagine, there’s a demonstration of it here, where you can purchase your own for $7.99.  Sadly, on the day we were there, the stick was broken and there was no back up, so what was supposed to happen was only explained to us.  We used our imaginations to think of the stick alight.

The next station for the girls was a demonstration of wind power.  The girls worked in teams to try to race little cars with box fans behind them.  It was a challenge and most teams never got a car near the finish line.  Not a terribly illustrative way to demonstrate the science of wind power. 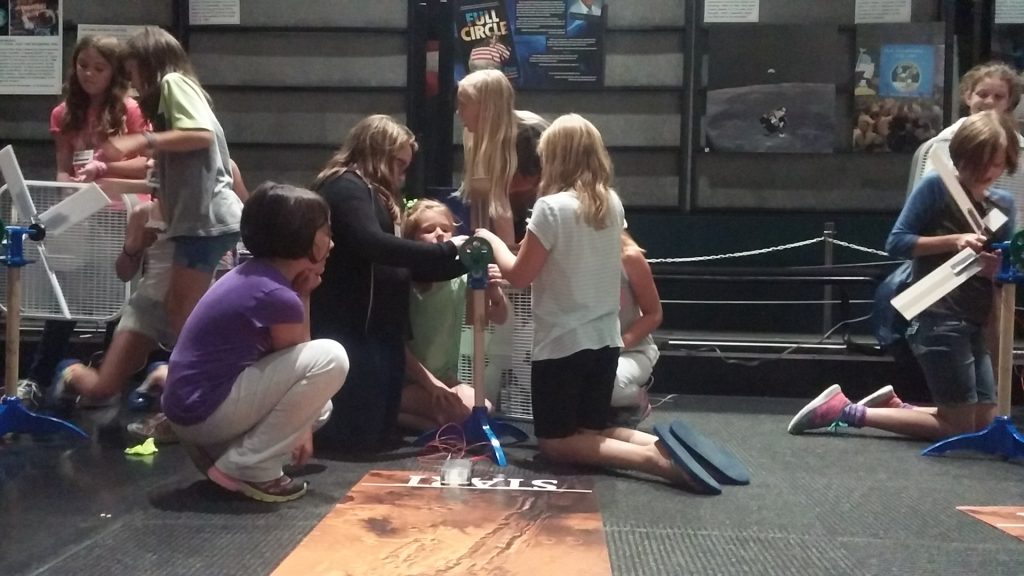 I mean, who wouldn’t have fun?

Then the girls looked at various pictures of the night sky.  Some had brilliantly visible stars, some had no stars at all, and a handful of pictures were somewhere in between.  The tour guide asked the girls to identify what the sky looked like to them at home.  It was humbling for me to see that our Leander girls were the only ones in the group who identified the picture full of stars (thanks to our dark sky ordinance, I’m sure).  That segued into the final project of the night, where the girls used a watch battery, a tiny LED lightbulb and some craft foam to make tiny little flash lights (not flash light as in, it can light the way for you.  Flash light as in, “I think the coffee is ready, but I can’t tell if the little red light is on”).

You see, Boy Scouts and Cub Scouts get a very different experience.  They get to build rockets, program robots, and create their own Mars Rover.  Seriously.  This wasn’t 1950.  This was 2015.  Don’t believe that level of inequality existed that recently?  Check out the Space Center’s website.  The boy sleepovers look precisely as they did three years ago, while the page for girls, touts the “all-new Girl Scout camp in activities” which are now very similar to what the boys do.  This is 2018.  20-18.  Kudos to NASA for realizing the girls not only could do, but would enjoy doing the same activities as boys, but seriously, they’re about 50 years behind on the revelation.

I had spent years telling my Scouts that they could do anything boys could do and they could be anything they wanted to be.  I promised.  I ingrained it into them all the time.  I believed it.  This trip crushed me.  It still does.  It still  hurts now to think of how unequaled we were.

Here’s the thing though:  it’s not just one trip.  There are inequalities that are around us today and they’re so common that we’re blind to it.  When a baby changing station is only in the women’s restroom and not in the men’s, that’s telling us that only women can change diapers.  When Wonder Woman is the biggest thing at the Box Office, but Target only has 4 pegs of movie merchandise consisting exclusively of dress up clothes and Barbie Dolls, while Spiderman has range after range of toys, the sense is that our imaginations aren’t as robust.  When women have entirely different signs of a stroke than men, but we’re only ever taught to look for traditional men’s symptoms, the message is our lives are unimportant. 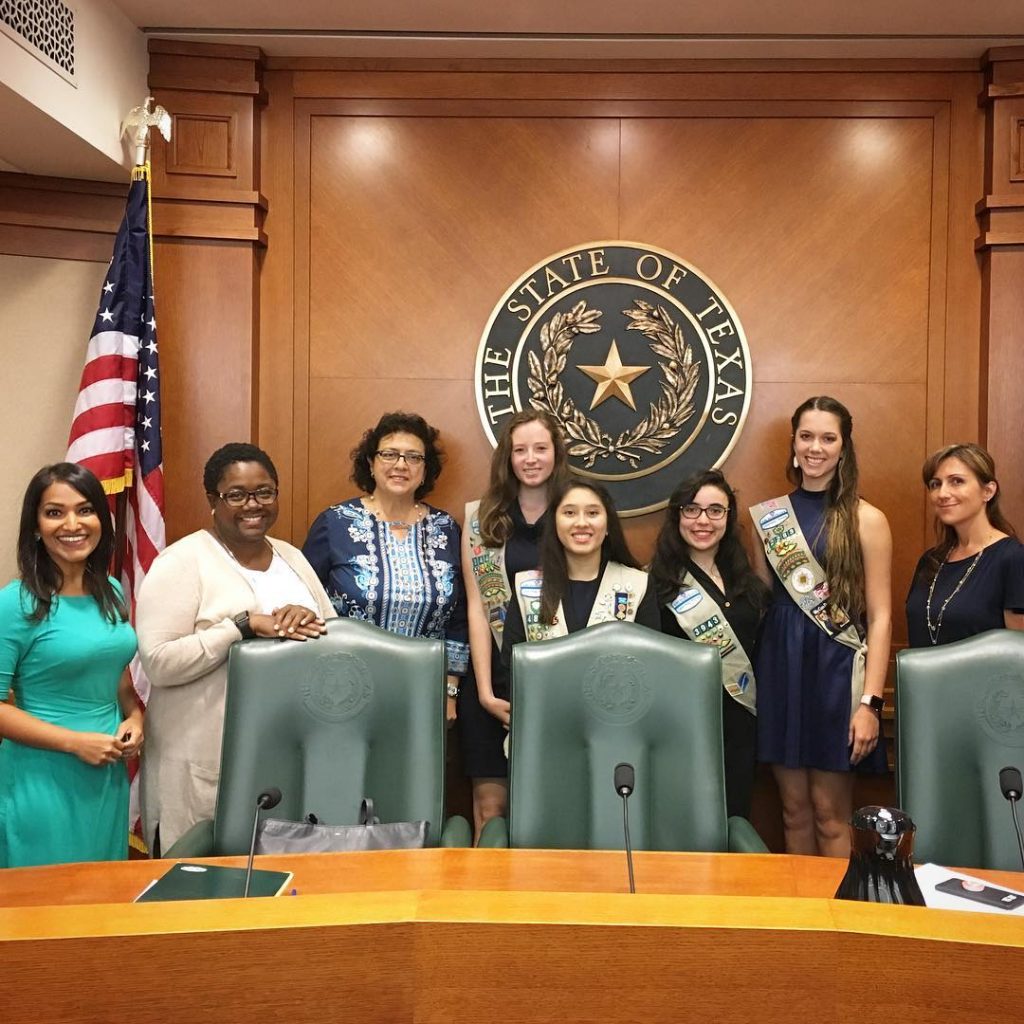 Don’t get me wrong: I’m not one of those women who thinks it’s wrong for a man to hold a door open.  I expect my son to be a gentleman,  and when I encounter men who don’t know the gentleman code, I silently judge them and their parents.  All I’m saying is that “equality” means a lot of different things to a lot of different people.

So back to my starting point of being called “Council Member”.  I understand where it came from.  Someone with good intentions said “we’ll level the playing field and call everyone the same thing”.  But to me, this is on par with lowering testing standards so you can claim that more people passed.

Every generation of women in my family have had inequalities applied to them.  My mother was made to stay out of public during her first pregnancy because it was socially unacceptable.  My grandmother was forced to leave the Army when she got married because married women couldn’t serve.  Her mother and every generation of women before that had to stay home to raise children.  Education wasn’t important.  They couldn’t work.  They couldn’t own property.  They couldn’t vote.  And many of them probably couldn’t read.  They had very little say in their lives.

The 19th Amendment to the US Constitution, giving women in every state the unquestionable right to vote was passed in 1919 and ratified in 1920.  Women’s Suffrage was being fought for ardently prior to the Civil War.  We haven’t even been entitled to vote for an entire century yet, and it took more than 70 years of hard fighting to even get to that point.

When I am referred to as “Council Member” I think of the fight and the sacrifices of those that came before me.  I imagine my Great-Grandmothers and all of their mothers are somewhere beaming with pride that I’m an elected official who gets to be openly opinionated.  They only wanted a fraction of what I’m allowed to have.  I feel the appropriate term should be “Council Woman” because it pays reverence to our gender, our ancestors, and all the girls who feel less than because they didn’t get to build the robots at NASA.

With great power comes great responsibility though.  Female elected officials are viewed differently.  We just are.  When I was running, I was asked several times how I would juggle my children along with my responsibilities on Council.  When I said the same exact thing as some of the men running, I was called “stupid”.  The proof is on Facebook.  These things happened.  And I’ve always watched my tone in politics, because while a man can have the same tone and be “aggressive” well, we all know that there’s another term that would be applied to females.

So here is my challenge to women who have been entrusted with this great responsibility: Let’s not become caricatures of ourselves.  We’re on the same team.  Let’s work together.  Let’s show younger girls that they can build robots AND go into politics.  Let’s not roll our eyes at each other.  Let’s not speak over each other.  Let’s not spread rumors about each other.  Let’s speak with passion, knowledge, and grace.  If we want to continue the movement toward true equality, we have to demonstrate that we are worthy of such.  People are watching.  They’re learning from the examples that we set.